The WGACSF held its annual Kick-off Meeting at Siwanoy Country Club, in Eastchester, N.Y., on Thursday, May 19. Before the meeting, those who visited Siwanoy were treated to a great round of golf. The meeting itself prepared the Board of Directors and Club Representatives for the fundraising efforts in 2022, while also serving as the setting for the official presentation of the 2021 honor roll awards. Below are the highlights from the awards ceremony. 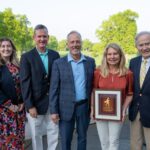 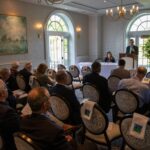 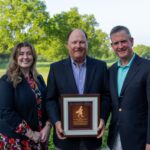 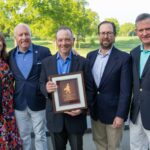 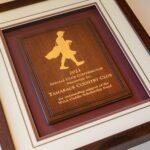 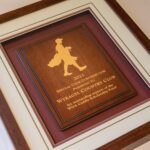 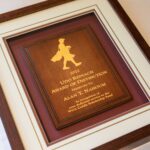 For the second year in a row and ninth time overall, Westchester Country Club was given the Willie Turnesa Outstanding Contributor Award. Otherwise known as the Club of the Year, it is awarded based on total contributions, per capita contributions, percent increases and consistency in giving to the Program. Last year, Westchester’s support was extraordinary, having contributed over $95,000.

Dave Christie was awarded the Sally Francis Alumni Award, which is presented to an outstanding alumnus/a for his/her continued support, service, and loyalty. Dave, a graduate of the CSF class of 1971, has served on our Board of Directors since 2012, dedicating considerable time and effort to his roles as the Vice President for two years and recently as Treasurer for three years. His involvement extends beyond event participation to work on the Fund’s Audit Committee & Finance and Investment Committees to joining in during our caddie scholar interview days. Dave is also on the Board at The Stanwich Club, serving as Treasurer and Head of the Finance Committee. As our ambassador at Stanwich, he works to ensure the club’s continued support of the CSF and actively encourages those working in service to golf there to apply to the Fund.

Joe Pica of Shorehaven Country Club was honored with the Caddie Manager Outstanding Service Award. It is awarded to the Caddie Manager who has gone above and beyond to support the Fund. Pica’s efforts in support of the WGA Caddie Scholarship Fund have been truly remarkable. Each year, at our Golf Marathon he manages to out-do his previous years’ fundraising records on behalf of Shorehaven Golf Club. In 2021, the members of Shorehaven rallied behind Joe and his participation in the event brought in over $93,000 directly benefitting the Fund. As the current president of the CGSMA, he has used this platform to raise awareness amongst his peers and as the Caddie Manager at Shorehaven, he has been and continues to be an advocate of the Caddie Scholarship Fund program. With Joe’s guidance and encouragement, eight young men from the club are currently receiving a caddie scholarship for the 2021/22 academic year and two more have already begun applications for the present application cycle.

Finally, Alan Nahoum was awarded the Udo Reinach Award of Distinction. The Udo Reinach award is awarded to an individual who has demonstrated outstanding service and support of the Fund in the form of time, impact, and contributions. Alan was recommended for his extraordinary service to the Fund as president. He has served on the Board of Directors since 2010, as Secretary for a two-year term and as President for four years. During his tenure, he invested countless hours, made thoughtful and strategic contributions, and implemented initiatives to significantly enhance the Fund’s operations. Additionally, Alan has served as liaison between Evans and the CSF, helping to advance the relationship between the two funds.
Alan’s unwavering commitment to ensuring that the most funds reach the most in need has been inspiring. His determination to address issues facing our scholar recipients and to strengthen our impact on the community continues today and will be felt for generations of caddie scholars to come.

Darien, a Leader in Westchester